DROP US AN EMAIL

We set out below what happens during a trial. A trial is a very fluid process. The unexpected can happen and lawyers have to be experienced and be quick on their feet to deal with these contingencies. In any case, below is the usual trial process. 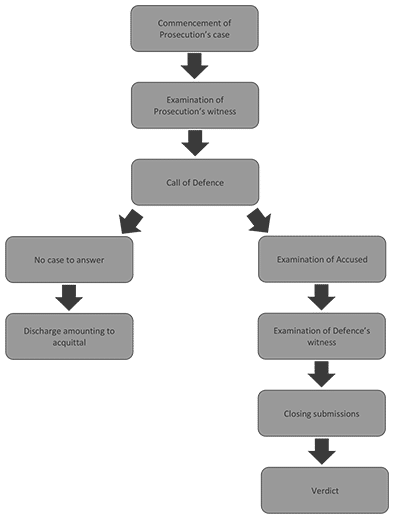 A criminal trial will usually begin with parties giving a summary of what they hope to achieve at trial and how they will do this. The Prosecution will present its case and has to prove the commission of the offence beyond reasonable doubt, meaning that there is no other logical explanation from the facts except that the defendant had committed the crime. The Prosecution’s case will be as follows:

Evidence is the lifeblood of a trial. It is adduced in the process called Examination-in-Chief. The Prosecution will call their witness to give evidence and to speak about what has happened. The evidence which the Prosecution can present through the witness may take the form of documents, photographs or other objects. Notably, during this process, the prosecutor is not allowed to ask leading questions. Leading questions are questions where the answer is usually contained in the question itself and the examiner is attempting to seek a confirmation. On the other hand, non-leading questions allows the witnesses to provide the information voluntarily. An example of a leading question would be “were you at the victim’s house on 23 June 2019 at 3pm?”. By contrast, a non-leading question would be “where were you on 23 June 2019 at 3pm?”.

The accused may apply for a subpoena to ensure that his/her witness will attend the trial. The subpoena will be sent to the witness, stipulating the specific time and date for the witness to attend Court and to produce documents if required.

After all the witness has provided evidence at the trial, the Prosecution and the Defence will be given the opportunity to make closing submissions. Closing submissions is used to summarise the evidence and arguments and to persuade the Judge to decide the case in the party’s favour.

Linkedin
Back to Insights

Why every business needs a contract review

Directors – Dealing with Conflicts of Interest #2

Directors – Dealing with Conflicts of Interest #1

SPEAK WITH OUR EXPERTS TODAY!

SPEAK WITH OUR EXPERTS TODAY!